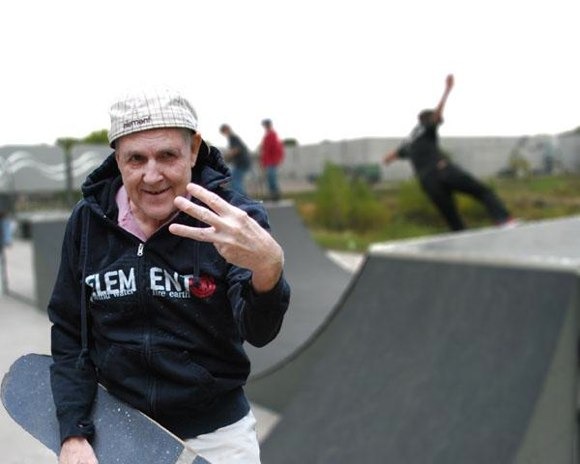 I am a Grown man on a skateboard

By Brent Spilkin10th Jun 2011No Comments

Ollie, Cab, Fakie & backside-grind could all be the names of sexual manoeuvres in the bedroom but they aren’t. They are skateboard tricks and positions that make perfect sense to a 36 year old guy like myself because once a skateboarder always a skateboarder. 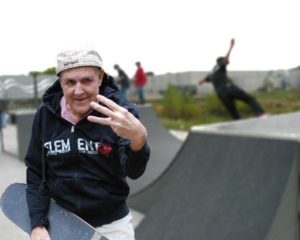 My skate career was short lived. By the time i started Varsirty at the age of 19 it was over, due to injury and lack of talent, but mostly due to fear. I was a Pussy on the board. I was scared of self mutilation and crushed balls. I used to hang around car parks, garages and malls looking for the smoothest surfaces and the Gnarliest jumps, with my weed smoking mates (even though I never really knew what they were smoking, Mom) and kill time and knee joints.
They were great times back in the late 90’s. Music was hard, grunge was prominent and the the whole skateboard vibe was just taking off globally. It would, over time, dominate modern culture and extreme sports. Skateboarding lead the way for all the “underground” extreme sports to flourish and become popular and *shock* even make business sense.
Careers & names like Tony Hawk, Shaun White (the flying Tomato) & Steve Caballero would become household names and the Sponsors & Manufacturers like Burton snowboards, Red Bull Energy drink, Plan B and Alien Workshop would become global brands on the back of these sports.
I have since given my last deck to my 3 year old nephew and lets pray he has bigger balls than me. The only skating I now do is on the   recently downloaded Tony Hawks Pro Skater 2 for I-phone and I have lost days of my life squeezing that screen doing aerial moves which my real-life psyche would never allow. There is something so special about the sound of wheels spinning, metal trucks grinding and that feeling of pulling the perfect ollie over a curb-cut.
I am lucky enough and talented in other departments to have been invited to the Red Bull Manny Mania Skateboard contest which is being held in 4 South African cities, with the finals in New York City. The last 2 days & local finals, are on the 24-25th June at Revolution Skate Park, Kempton Park, Jo’burg.
Come say Hi and maybe get to see me on a skateboard holding in my sphincter as tight as i can at my age!
for more info go to http://www.redbullmannymania.com/
remember when the sign said “Remember, skating is not a crime“
@spillly