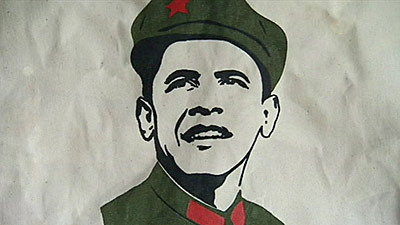 China Visit: Obama’s Cultural Revolution
6:10am UK, Monday November 16, 2009
Peter Sharp, China correspondent, Beijing
If America’s young president has lost a little of his shine in some parts of
the world, Obama is expected to receive an enthusiastic reception in China. A T-shirt depicting Obama in Chairman Mao tunic and cap has been banned
Young Chinese are intrigued and fascinated by the new President.
In a nation run for decades by elderly, faceless men in dark suits, Obama
brings a great dollop of “Xin Gan”- sex appeal – to international politics.
Beijing is awash with Obama souvenirs; dolls, T-shirts, bags and fridge
magnets bearing the President’s face are on sale across the city.
The Oba-Mao T-shirt which depicts the President dressed in Chairman Mao
tunic and cap has already been banned by the government as being
“disrespectful”. Whether to the memory of Mao or Obama is unclear.
Many Chinese were genuinely amazed when an African-American became President
of the US and among the young there is open admiration for the man. Beijing is awash with Obama souvenirs
Liu Shuang is a 15-year-old language student from En Shi, a small town in
Central China and she is clear about what attracts her to the American
leader.
“I feel he treats his family and society with a kind of love.”
At Shuang’s school, Obama’s best-selling book The Audacity of Hope is part
of her English syllabus.
Teacher Wang says the book is inspiring and would encourage his students to
pursue their English Studies.
For the Chinese authorities the visit has been stamped “Nothing Must Go
Wrong.”
The security lockdown in Beijing has already begun around the St Regis Hotel
where he will stay for two nights.
Whole blocks have been sealed off. And it’s not just the President’s
security that is giving them concern.
As with any high-profile event in China there is a real fear among the
authorities that protesters will attempt to hijack the occasion and
demonstrate against China’s woeful human rights record.
There are no plans for a news conference with the President while he is in
China. So no embarrassing questions about political rights or human rights
that would irk Obama’s hosts at a time of sensitive trade talks
Love0